GoodReads Summary:
Tana lives in a world where walled cities called Coldtowns exist. In them, quarantined monsters and humans mingle in a decadently bloody mix of predator and prey. The only problem is, once you pass through Coldtown’s gates, you can never leave.
One morning, after a perfectly ordinary party, Tana wakes up surrounded by corpses. The only other survivors of this massacre are her exasperatingly endearing ex-boyfriend, infected and on the edge, and a mysterious boy burdened with a terrible secret. Shaken and determined, Tana enters a race against the clock to save the three of them the only way she knows how: by going straight to the wicked, opulent heart of Coldtown itself.
The Coldest Girl in Coldtown is a wholly original story of rage and revenge, of guilt and horror, and of love and loathing from bestselling and acclaimed author Holly Black. 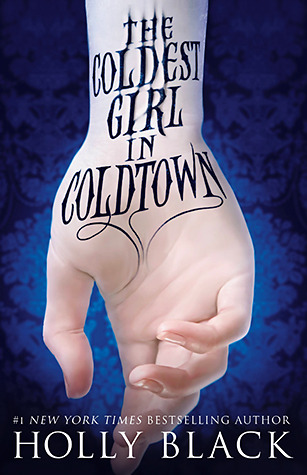 Review:
Honestly, I am living for all of these backlist vampire stories that I somehow never read. To those that think the vampire craze had ended, they are completely wrong and should go away. I will be obsessed with vampires forever. My husband likes to joke that I have a fetish. (Really a joke or not? We may never know).
Tana was a main character I could get behind. She’s got trauma in her past, and because of that she’s trying to the right thing for her dad and her little sister. But also, she’s beyond intrigued by Gavriel, the mysterious vampire that she rescued along with her ex-boyfriend Aidan. I liked Tana. She never gave up even when it seemed like things just could not get any worse, the did. But that didn’t stop her. She made this story what it was.
Gavriel was interesting. I really enjoyed that we got his history throughout the story. It really gave us a better understanding of who he was and how he got where he is now. I couldn’t help but like him, even though he was kind of crazy.
Adian was an idiot. He was also kind of a jerk. I just wanted him to F off. I mostly liked the rest of the supporting characters. They were well developed and added the right stuff to the story. Except Pearl. Every time I read about her I couldn’t help but shake my head. I get that she’s just a little girl, raised in a world that glamorized vampires, but she was just too much.
Overall, I really loved this book. It was perfect for October. I loved the twist on vampire lore and the way the vampires changed the modern world. The only thing I didn’t like was the final chapter. I was left with just one question. Which was better than lots of questions, but it was a pretty important question. Despite that, I still loved this book.

“Every hero is the villain of his own story.”

“We labor under so many illusions about ourselves until we’re stripped bare. Being infected, being a vampire, it’s always you. Maybe it’s more you than ever before. You, distilled. You, boiled down like a sauce. But it’s you as you always were, deep down inside.”

2 thoughts on “The Coldest Girl in Coldtown by Holly Black”