GoodReads Summary:
There are many ways the world could end. There could be a fire. A catastrophic flood. A supereruption that spews lakes of lava. Ellis Kimball has made note of all possible scenarios, and she is prepared for each one. What she doesn’t expect is meeting Hannah Marks in her therapist’s waiting room. Hannah calls their meeting fate. After all, Ellis is scared about the end of the world; Hannah knows when it’s going to happen.
Despite Ellis’s anxiety—about what others think of her, about what she’s doing wrong, about the safety of the ones she loves—the two girls become fast friends. But time is ticking down, and as Ellis tries to help Hannah decipher the details of her doomsday premonition, their search for answers only raises more questions. When does it happen? Who will believe them? How do you prepare for the end of the world when it feels like your life is just getting started? 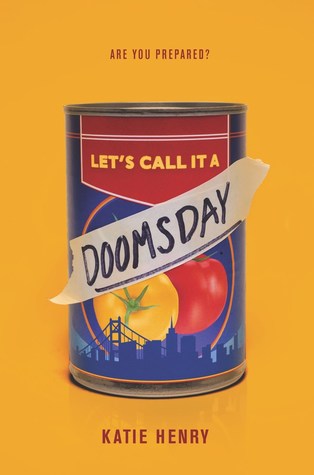 Review:
After absolutely adoring Heretics Anonymous, I knew I had to pick up Katie Henry’s new release, Let’s Call It a Doomsday. I’m so so glad that I did because it was even better than I expected it to be.
We follow Ellis as she struggles to keep her anxiety under control. She has intrusive thoughts, some that we get to see on the page. Her biggest worry is that the world is going to end. So, when she meets Hannah at her therapist’s office and then sees her again at school, she’s interested. Especially when Hannah tells her she knows when the world is going to end.
I loved Ellis. She was realistic and thoughtful and I just enjoyed her character. She battled her anxiety every day. She’s Mormon and despite lots of factors, she says true to her faith which was inspiring. Being able to believe so fiercely in something is admirable to me because I don’t have that same faith. Her journey of self-discovery, learning about her sexuality and how to handle her anxiety.
Then there’s Hannah, who is quirky and eccentric. I really liked her at first, but the more I learned about her the more I wanted her to just leave Ellis alone. She was the cause of pretty much all of the conflict in the story and every single one of her motivations were selfish. Despite that, she managed to push Ellis out of her comfort zone, to try new things and of course, she introduced her to Sam, Tal, and Theo.
These three boys were one of my favorite parts. Pot smoking, deep conversation having, ‘five-word-book-title’ guessing kind of friends. I love that they just immediately accepted Ellis into their group. They never pressured her to do anything that they were doing. They were just a funny group of kids.
I really really loved Tal. I loved the conversations about religion they would have. I also loved how he helped her see that there’s more to sexuality than she thought. I thought he brought so much goodness to the story. I 10000% ship them with my whole heart.
Overall, this book was funny, and heartfelt, and just wholesome. It showed anxiety in a realistic way. It talked about religion in a thoughtful way. Sexuality was talked about by several different characters in an honest way. I think this book did just about everything right. It’s one I plan to recommend again and again.