GoodReads Summary:
They thought they’d already faced their toughest fight. But there’s no relaxing for the reunited Zeroes.
These six teens with unique abilities have taken on bank robbers, drug dealers, and mobsters. Now they’re trying to lay low so they can get their new illegal nightclub off the ground.
But the quiet doesn’t last long when two strangers come to town, bringing with them a whole different kind of crowd-based chaos. And hot on their tails is a crowd-power even more dangerous and sinister.
Up against these new enemies, every Zero is under threat. Mob is crippled by the killing-crowd buzz—is she really evil at her core? Flicker is forced to watch the worst things a crowd can do. Crash’s conscience—and her heart—get a workout. Anon and Scam must both put family loyalties on the line for the sake of survival. And Bellwether’s glorious-leader mojo deserts him.
Who’s left to lead the Zeroes into battle against a new, murderous army? 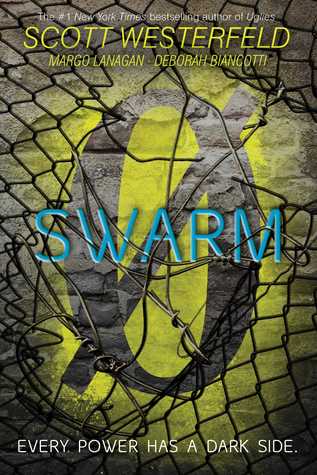 Review:
What a wild ride this was. Swarm was not at all what I expected. I thought I was going into a story similar to Zeroes and in some ways it was, but this one was much darker.
We follow the group of friends that call themselves the Zeroes while they try to learn more about their powers and how best to use them. They’ve created their own nightclub to practice with groups of people. I liked seeing them all come together to try to learn how to better control their abilities. Right up until the group finds more Zeroes, a couple who tells them of Swarm and how he is coming to kill them all.
Ethan, or Scam, has this other voice that always knows exactly what to say to get what Scam wants. Except when there’s nothing to be done. I think he was interesting but a little whiney. He’s trying to be better and not let his voice hurt the people he cares about. But it still happens. I think he’s the most interesting because his power is the only one that doesn’t work better with six or more people.
Nate, or Bellweather, or Glorious Leader, seemed to lose his footing in this story. I really like the ending and how he managed to use his power in a different way. That was really interesting. He’s the one that motivates everyone and hypes them up. He connects them all to one another. I also think he’s the one with the least development. We finally see him in a situation that he doesn’t know how to get out of, which was interesting.
Riley, or Flicker, is my favorite. She is blind, but her ability lets her see through the eyes of others. She’s frustrated at constantly being underestimated and I can understand that. I really like her romance with another Zero and my heart was a little broken in the final pages.
Chizara, or Crash, has the most inner turmoil. She wants to be good and not to cause any damage, but her power is all about damage. Though she’s learning that she can fix things too. I think there were more opportunities to explore with Crash’s character and her development but I really liked her complexity.
Kelsie, or Mob, has lost her father and she’s trying to figure out where she fits in a world without her dad. She struggles with the moral ramifications of her abilities. She’s able to manipulate emotions within a crowd. So when she finds out she could potentially become another Swarm, she’s understandably scared. She’s also one half of a female/female relationship that is a part of the story.
Finally, there’s Thibault, or Anonymous, who is my second favorite. He’s been through so many hard things in his life and is just trying to make his loved ones remember him. So the way this story ends for him was a little devastating. I’m dying to know what’s going to happen for him in the next book. And maybe he can figure out how to change his abilities like Nate did.
Overall, Swarm was a wild ride and I’m dying to jump into the conclusion. I really cannot wait to find out what’s going to happen in the end. This book was fast-paced but also full of so many different plot lines. These Zeroes always manage to get themselves into all kinds of trouble and I can’t wait to see how they escape it in the final book.