Summary:
Molly Mavity is not a normal teenage girl. For one thing, she doesn’t believe that her mother killed herself three years ago. And since her father is about to be executed for his crimes, Molly is convinced that her mother will return to her soon. Finally, the hole in her heart will stop hurting.
Pepper Al-Yusef is not your average teenage boy. A Kuwaiti immigrant with serious girl problems and the most embarrassing seizure dog in existence, he has to write a series of essays over the summer…or fail out of school.
And Ava Dreyman—the brave and beautiful East German resistance fighter whose murder at seventeen led to the destruction of the Berlin Wall—is unlike anyone you’ve met before.
When Molly and Pepper are tasked with finding Ava’s murderer, they realize there’s more to her life—and death—than meets the eye. Someone is lying to them. And someone out there is guiding them along, desperate for answers. 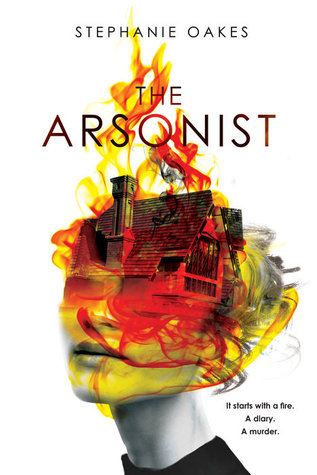 Review:
I found The Arsonist as my local Ollie’s Bargain Outlet store. I like to go there and check out their selection once in a while. I thought this book sounded interesting and the cover totally drew me in. I actually enjoy the cover even more after reading the book because there’s so much to the story that the cover tries to show.
The Arsonist was told in three perspectives. We follow Molly who is writing letters to an injured Pepper. She’s telling him her side of their adventures and everything she learned after he was injured. Hearing the story from both Molly’s side and from Pepper’s was a really interesting way to tell the story. We hear from Pepper as he writes ‘essays’ in an attempt to still graduate high school instead of just dropping out. So, Molly is writing to Pepper and Pepper is writing to his teacher. The third point of view is Ava Dreyman. She’s a girl that grew up in Germany during the time that the Berlin Wall was still standing. We’re reading her diary, learning about her life as we follow Pepper and Molly’s journey to find out what really happened to Ava.
This story was intricate and complex. There were so many different things going on and I’m awed by Stephanie Oakes ability to weave the different perspectives and timelines. The writing was interesting and authentic to each character. Ava’s chapters were accurate to her time, historically. I also liked how Pepper’s chapters showed errors in grammar and spelling because English was not his first language. I thought this was an interesting way to make the characters more authentic. I also really enjoyed that this was a story about ‘the weird kids.’ Molly was a girl that didn’t have any friends. Her mother killed herself and her father is in jail about to die via the death penalty because he killed six people when he burned down an abandoned house. Pepper was a boy that has a few friends, but is failing his senior year of high school and struggles with the death of his mother. Ava was a resistance fighter trying to take on the whole of Germany. These are kids that are just trying to make a difference.
Overall, I really enjoyed this one. I didn’t know what to expect going into it, but I’m really glad that I picked this one up. It surprised me a little that I’ve never heard anything about this book because it blew me away. I definitely recommend The Arsonist to anyone that likes a good mystery and also to those that like historical fiction. This one won’t disappoint.

One thought on “The Arsonist by Stephanie Oakes”