GoodReads Summary:
Kin Stewart is an everyday family man: working in IT, trying to keep the spark in his marriage, struggling to connect with his teenage daughter, Miranda. But his current life is a far cry from his previous career…as a time-traveling secret agent from 2142.
Stranded in suburban San Francisco since the 1990s after a botched mission, Kin has kept his past hidden from everyone around him, despite the increasing blackouts and memory loss affecting his time-traveler’s brain. Until one afternoon, his “rescue” team arrives—eighteen years too late.
Their mission: return Kin to 2142, where he’s only been gone weeks, not years, and where another family is waiting for him. A family he can’t remember.
Torn between two lives, Kin is desperate for a way to stay connected to both. But when his best efforts threaten to destroy the agency and even history itself, his daughter’s very existence is at risk. It’ll take one final trip across time to save Miranda—even if it means breaking all the rules of time travel in the process.
A uniquely emotional genre-bending debut, Here and Now and Then captures the perfect balance of heart, playfulness, and imagination, offering an intimate glimpse into the crevices of a father’s heart and its capacity to stretch across both space and time to protect the people that mean the most. 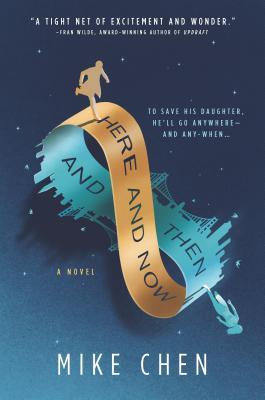 Review:
Here and Now and Then had me hooked just from the premise. But once I actually started the book, I seriously could not put it down. The pacing was just right. There were times when things moved quickly and other times when things slowed down for a beat, but nothing was ever happening too quickly or too slowly. I honestly didn’t think I was going to like this book when I was about a third of the way through. I was liking it well enough, but after a certain time travel incident, I didn’t like some of the characters. But Chen really brought everything full circle.
I really loved Kin. I at first his ‘agent brain’ was a little annoying and at times, choppy. But that got better the further into the story we got. He really loved his family and that was my favorite part of the story. This whole book was based on one man’s love for his family. Kin was passionate and just trying to figure out what to do that would be fair to all of the people he loves. I really admired his quick thinking and the fact that he tried to considered all sides of any decision.
Penny was one that I didn’t like for the first half of the book. She’s his fiancé in his original timeline. But I preferred Heather and Miranda, his family he made in the 90s. But Penny proves herself worthy over and over and I really grew to love her. I would have liked to see her stand up for herself to her parents, but we can’t have everything.
Heather and Miranda were my favorite part of this story. The time travel aspect really created some wild dynamics. I’m not going to say too much about Heather other than I liked her. Miranda though, had a pretty bumpy life. All because her father was a time-traveling secret agent. I was so intrigued by the ways that Kin managed to communicate with Miranda from the future and how things came full circle in the end.
Overall, there was so much to this story. Ideas that are completely over my head, but they were explained well and without info-dumping. I loved this book. Time travel, family values, what more could I ask for? If you’re a light science fiction lover, this is the story for you.

8 thoughts on “Here and Now and Then by Mike Chen”