Summary:
How did a raw chicken get inside Yasmany’s locker? When Sal Vidon meets Gabi Real for the first time, it isn’t under the best of circumstances. Sal is in the principal’s office for the third time in three days, and it’s still the first week of school. Gabi, student council president and editor of the school paper, is there to support her friend Yasmany, who just picked a fight with Sal. She is determined to prove that somehow, Sal planted a raw chicken in Yasmany’s locker, even though nobody saw him do it and the bloody poultry has since mysteriously disappeared. Sal prides himself on being an excellent magician, but for this sleight of hand, he relied on a talent no one would guess . . . except maybe Gabi, whose sharp eyes never miss a trick. When Gabi learns that he’s capable of conjuring things much bigger than a chicken–including his dead mother–and she takes it all in stride, Sal knows that she is someone he can work with. There’s only one slight problem: their manipulation of time and space could put the entire universe at risk. A sassy entropy sweeper, a documentary about wedgies, a principal who wears a Venetian bauta mask, and heaping platefuls of Cuban food are just some of the delights that await in his mind-blowing novel gift-wrapped in love and laughter. 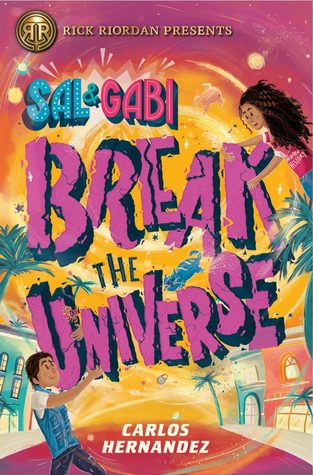 Review:
Rick Riordan is doing absolutely everything right with his publishing imprint. I will absolutely buy every book that has his name on it because I have loved every single one that I have read so far. Sal and Gabi Break the Universe was so much fun to read.
First things first, I don’t know WHY people aren’t talking about how this story follows Sal, who is a young Cuban boy that lives with diabetes. There really are not enough books out there that have characters that live with illnesses. The diabetes part of this book was so well represented. Though it slowly was mentioned less and less as the book went on. I really loved how Sal taught others about his experiences.
Sal as a whol, was such a fun character. He was such a ham, always pulling pranks and doing magic tricks. The way his mind worked was such a ride. I love the way he thought out his tricks but made sure to think about how they would make people feel.
My favorite part about this book was the family aspects. I actually had to look up an alternative for the phrase ‘broken family’that ares typically used when talking about an atypical family. But there was nothing broken about these families. Sal has a stepmother that he calls ‘American Stepmother’ which just cracked me up. I loved the relationship the family had. It was sweet and heartwarming. I also really enjoyed (and sometimes couldn’t keep up with) Gabi’s family. She has about a hundred different dad’s and they all have their own dad nicknames. One of them was even a robot. I loved every page.
I loved the science-based magic. Sal’s ability to see alternate realities really was fascinating. I thought it was so interesting the way the author used science and what not to explain Sal’s abilities.
Overall, this book had me grinning like a fool and cracking up. It was a bit less action filled than I thought it was going to be, but I still absolutely adored it.