Summary:
Vi Solaris is the heir to an Empire she’s barely seen. Her parents sacrificed a life with her to quell a rebellion and secure peace with a political alliance. Now, three years past when her wardship should’ve ended, Vi will do anything to be reunited with her family.
The Empire is faltering beneath the burden of political infighting and a deadly plague. Yet, Vi can’t help but wonder if her inability to control her magic is the true reason her parents haven’t brought her home. Suspicion becomes reality when she unleashes powers she’s not supposed to have.
Powers that might well cost her the throne.
As Vi fights to get her magic under control, a mysterious stranger appears from across the world. He holds the keys to unlocking her full potential, but the knowledge has an unspeakable price — some truths, once seen, cannot be ignored.
All eyes are on her and Vi must make the hardest choice of her life: Play by the rules and claim her throne. Or, break them and save the world. 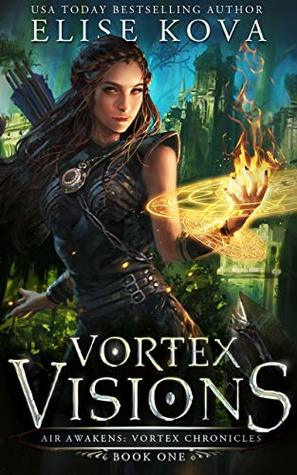 Review:
No surprise here, I absolutely loved this book. I loved everything about it. It’s taking everything in me right now to sit and write this review instead of starting the second book right now. I need to know what’s going to happen next.
I still adore this world. (check out my series review here for the original series!) I think the world that Elise Kova has created is so interesting and I really enjoyed getting to see more of in from Vi’s perspective. I’m hoping we get some more travel scenes like we did in the original series.
Vi’s character was my favorite. She’s snarky and sassy but also trying her best to be the perfect princess that she thinks she’s supposed to be. I loved her inner thoughts and struggles. I cannot wait to get to know Vi a little bit better. I also really hope we get to see some of my old favorites.
I have to mention that Elise Kova doesn’t pull any punches. I did some jaw-dropping and page gripping and mild inner shrieking. I read this book almost in one sitting because I adore these characters and I needed to know what was going to happen to them. There is so much up in the air and so many new things being introduced I really am too excited to continue this series in the world I already love so much.