Summary:
Alex Craft knows how to kill someone. And she doesn’t feel bad about it. When her older sister, Anna, was murdered three years ago and the killer walked free, Alex uncaged the language she knows best. The language of violence.
While her crime goes unpunished, Alex knows she can’t be trusted among other people, even in her small hometown. She relegates herself to the shadows, a girl who goes unseen in plain sight, unremarkable in the high school hallways.
But Jack Fisher sees her. He’s the guy all the other guys want to be: the star athlete gunning for valedictorian with the prom queen on his arm.
Guilt over the role he played the night Anna’s body was discovered hasn’t let him forget Alex, and now her green eyes amid a constellation of freckles have his attention. He doesn’t want to only see Alex Craft; he wants to know her.
So does Peekay, the preacher’s kid, a girl whose identity is entangled with her dad’s job, though that does not stop her from knowing the taste of beer or missing the touch of her ex-boyfriend. When Peekay and Alex start working together at the animal shelter, a friendship forms and Alex’s protective nature extends to more than just the dogs and cats they care for.
Circumstances bring Alex, Jack, and Peekay together as their senior year unfolds. While partying one night, Alex’s darker side breaks out, setting the teens on a collision course that will change their lives forever. Edgar Award-winning author Mindy McGinnis artfully crafts three alternating perspectives into a dark and riveting exploration or what it means to be the female of the species. 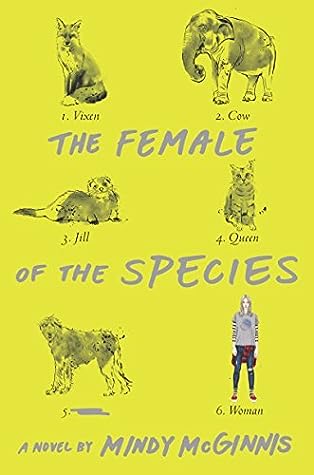 Review:
The Female of the Species has been on my TBR list for entirely too long. I don’t know what took me so long but I’m really glad I finally read this. I found the audiobook available from my library and I’m so happy that I chose to read this via audio. The story is told in three different perspectives. We follow Alex, Peekay, and Jack. They each get their own chapters and their own narrators. I thought that McGinnis did an incredible job of giving each character their own distinct voice and personality.
Peekay was my favorite, but that’s probably because she reminded me a bit of myself when I was in high school. She can’t outrun the identity of being the preacher’s kid, but she manages to rebel where she can. She doesn’t hesitate to drink with her friends. She makes friends with Alex while they’re working together at the animal shelter. I really liked Peekay.
I also really liked Alex. I liked that she was quirky and didn’t talk like everyone else. Honestly, even though she took justice into her own hands, I found myself really sympathizing with her rather than being disturbed by her actions. I think most women can relate to wanting to take action against those that have done wrong. But most women would never actually take action like she does. I think Alex grew and developed wonderfully in this book right alongside Peekay.
Finally, Jack. He was my least favorite of the three. This is because despite him knowing and acknowledging when he was doing or about to do something wrong, sometimes he still did it. He was frustrating sometimes because I wanted to love him so much, but he wasn’t always a good dude. I liked him well enough. He was also a pretty realistic character if I were to compare him to the guys I went to high school with. I think that’s why I didn’t hate him, because despite his flaws, he was real.
Overall, I think this book brought really interesting conversations to the table in a way that was easy and accessible. This book wasn’t always easy to read but I think that was just a part of the experience. There were some hard parts involving animals that come with the characters working at an animal shelter. This was a heavy book, but I just found that I couldn’t put it down.

6 thoughts on “The Female of the Species by Mindy McGinnis”