Hi, lovelies! Another round of Tome Topple has come to an end. I hope everyone was as successful as I was this round! I managed to read three out of the four tomes I put on my TBR list for Tome Topple Round Eight. 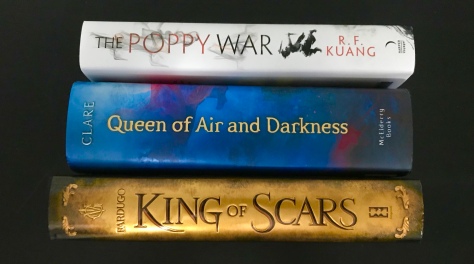 I read three tomes which means I completed this challenge!

Second Challenge: Read a tome that has been on your TBR the longest

Queen of Air and Darkness by Cassandra Clare

Third Challenge: Read a tome that is part of a series

King of Scars by Leigh Bardugo

Fourth Challenge: Read a tome in a genre you don’t usually read

The Poppy War by R.F Kuang

I had a different tome planned for a genre I don’t usually read, but it’s the same genre as The Poppy War but young adult historical fantasy. I managed to complete all five challenges this round with three different books. Let me know how you did for this round in the comments!