Summary:
It’s been only months since Eragon first uttered “brisingr,” the ancient language term for fire. Since then, he’s not only learned to create magic with words—he’s been challenged to his very core. Following the colossal battle against the Empire’s warriors on the Burning Plains, Eragon and his dragon, Saphira, have narrowly escaped with their lives. Still, there is more adventure at hand, as Eragon finds himself bound by a tangle of promises he may not be able to keep.
When danger strikes from every corner, Eragon must make choices—choices that will take him across the Empire and beyond, choices that may lead to unimaginable sacrifice.
Eragon is the greatest hope to rid the land of tyranny. Can this once simple farm boy unite the rebel forces and defeat the king? 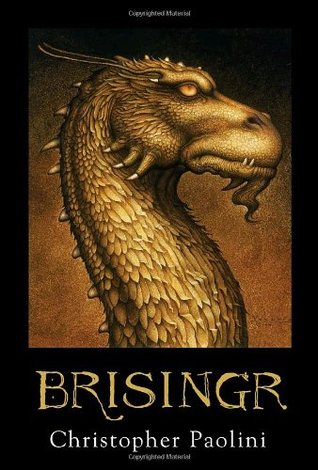 Review:
I’m going to be honest here. I had a really hard time with this book. It didn’t keep my interest like the first two did. I don’t know if that’s because of the different perspectives or something else, but I kept putting it down and really had to convince myself to pick it up again. Part of me is wondering how I’m going to get through the final book.
Things I liked are as follows; I love that we’re seeing some really great character development from Eragon. He’s grown so much from the annoying boy he was in the first book. I’ve really grown to care about him and his journey. He’s making better choices and really thinking about the effects that his actions have on the world around him. I also really enjoyed the big reveals we were given. We learn a few things that pull the story together. I thought they were unexpected and I really enjoyed the plot twists. I also enjoying seeing more of the world this story takes place in. Eragon travels all over and I love seeing the world because it’s full of so many interesting characters and places. There are some great relationships that have been developed over the time line of the story and the just get better and better.
What I didn’t like; no surprise here. Roran, Eragon’s cousin. I just don’t care about him. I think I might have cared had we learned about him in another way, but when the story is in his perspective it just makes me want to put the book down. I don’t care what he thinks or says. Katrina is annoying with always worrying and him never wanting to worry her. I just don’t care about him. I don’t know what it is.
Overall, I’m still hooked enough into the story, especially since I’ve read three of the four books. So, I’ll be continuing onto the fourth book because I need to know how Eragon is going to defeat the villain. I am excited to see how this saga is concluded and what Eragon comes up with to beat the big bad.

One thought on “Brisingr by Christopher Paolini”