Summary:
Eragon and his dragon, Saphira, have just saved the rebel state from destruction by the mighty forces of Galbatorix, cruel ruler of the Empire. Now Eragon must travel to Ellesmera, land of the elves, for further training in magic and swordsmanship, vital skills of the Dragon Rider. It is the journey of a lifetime, filled with awe-inspiring new places and people, each day a fresh adventure. But chaos and betrayal plague him at every turn, and Eragon isn’t sure who he can trust.
Meanwhile, his cousin, Roran, must fight a new battle back home in Carvahall—one that puts Eragon in even graver danger.
Will the kind’s dark hand strangle all resistance? Eragon may not escape with even his life… 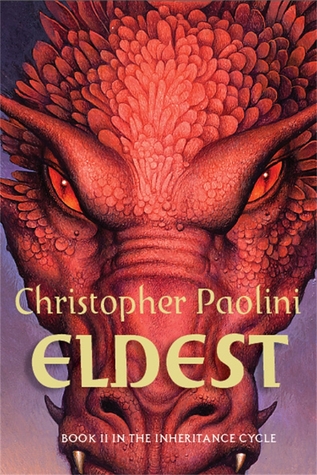 Review:
Eldest is the second book in the Inheritance Cycle. I’m buddy reading this series with Antonia because she’s wonderful and bought the whole series for me as a Christmas gift. Check out my review for the first book, Eragon, here.
I enjoyed this book, not quite as much as the first, but I enjoyed it. There was a lot of traveling and learning in this book that tends to come with fantasy books but I don’t mind that. I really enjoyed following Eragon as he learned all about the history of the Dragon Riders and elf culture. I thought the world in this book is incredible. It’s so complex, intricate, and well built. The writing is also intricate and well done. The story flows smoothly and is filled with creative and interesting language.
I believe that the most impressive part about this book is Eragon’s character growth. He learns so much about himself and about the world around him in these pages. By the final page he is not the same boy that he was on page one. He really takes the things he learns and adapts his world view and opinions. He’s not afraid of learning new things and letting those things change him. He becomes a man in this book.
I was blown away again and again by the plot twists Paolini threw at us. I’m not sure how many texts I sent to Antonia saying, “WHAT DID HE JUST DO” because the author had me dropping my jaw a fair few times at the end of the story.
We were introduced to a few new characters in this second book. the one that I’m most interested to learn more about is the elf that trained Eragon in the Dragon Rider ways. I just have a feeling that there’s more to his story that we haven’t learned yet.
The only aspect of this story that I didn’t enjoy was the changing perspectives. I’m usually all for different perspectives, but one of the points of view was from Roran (Eragon’s cousin)and I just couldn’t bring myself to care about those chapters at all.
Overall, this was pretty much what I was expecting from this sequel. We traveled. We learned. We grew. I loved it and I’m very excited to see where the story goes from here.

“How terrible,” said Eragon,”to die alone, seperate even from the one who is closest to you.”

3 thoughts on “Eldest by Christopher Paolini”