Summary:
The faction-based society that Tris Prior once believed in is shattered-fractured by violence and power struggles and scarred by loss and betrayal. So when offered a chance to explore the world pass the limits she’s known, Tris is ready. Perhaps beyond the fence, she and Tobias will find a simple new life together, free from complicated lies, tangled loyalties, and painful memories.
But Tris’s new reality is even more alarming than the one she left behind. Old discoveries are quickly rendered meaningless. Explosive new truths change the hearts of those she loves. And once again, Tris must battle to comprehend the complexities of human nature-and of herself-while facing impossible choices about courage, allegiance, sacrifice, and love.
Told from a riveting dual perspective, Allegiant, by #1 New York Times bestselling author Veronica Roth, brings the Divergent series to a powerful conclusion while revealing the secrets of the dystopian world that has captivated millions of readers in Divergent and Insurgent. 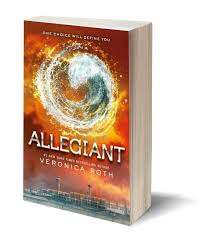 Review:
I just finished Allegiant and I’m still wiping the tears off my face. I can’t believe some of the things that happened. I really enjoyed watching these characters grow up and change as their lives changed. I really really liked Allegiant, but I’d have to say that Divergent is still my favorite. But there were so many things I liked about this book. One thing that made it a different experience was that it was told from both Tris’s and Four’s perspective. This was something I really liked because we could see more into Four’s head and know him better. Something else I made note of in the story that I liked was that even though Four and Tris are in a serious relationship, the things that go on between them are always kept appropriate for the younger readers. I thought that was nice. Allegiant was full of action and surprises and suspense. There were so many twists and turns, things I didn’t see coming. I was on the edge of my seat the entire time. I loved almost every page. I definitely think one of the twists could have been avoided and things written differently. But I’m not Veronica Roth, and she must have written it this way for a reason. Another thing I really liked about Allegiant was that it had so many good quotes. This is definitely going to be a series I read again and highlight next time.
Now, to the characters. Christina plays a bigger part in this book than she did in the two previous. I really enjoyed reading about so much of her. She’s spunky and funny and similar to a couple of my friends actually. She supports Tris so much in this book. The two had their ups and downs and worked through them. Christina becomes Tris’s go to person, after Four of course. Next is Peter. He doesn’t play a huge part in this story. But we still get to see him grow into an even more terrible person. He only does whats best for him. But at the end of the book I kind of seriously admire him. He knows that he’s an awful person, and makes the executive decision to do something about it. He gives himself a chance to start over. and I thought that was deserving of my respect.
I loved Caleb in the first book and hated him in the second. In Allegiant he tried to make things better. He put forth the effort. Not a lot of effort, but it was there. And in the end I forgave him just like Tris did. Caleb did quite a few stupid things, that he eventually came to deeply regret. Things that he was willing to give his life to make up for. At the end of Allegiant, I don’t hate Caleb, but I’m also not his biggest fan.
Four is the love of my life. But not really, because he and Tris are too perfect for each other for anyone to mess with that. In Allegiant, we get to read part of the book from Four’s perspective, which I loved because we got to know how he thinks and way more about him. He does something kind of dumb in the beginning of the book that Tris ends up forgiving him for. Four has a really hard time excepting his flaws and insecurities which is the only thing I don’t like about him. He’s way too hard on himself, mostly for things that he has no control over. Tris makes Four a better person, as well as the other way around. I love the relationship between these two so much. One thing I love is that unlike most other couples they actually talk to each other. They fix their problems. They get to the root of whats going wrong and make it better. And they survive as a couple because of this. They are just perfect for each other.
And now, we talk about Tris. Tris has gone through so much in these three books. She’s dealt with way more than any normal person could handle. She’s so strong. And I loved reading about her growing into a better person. She has a lot of people do many different tests on her. And she’s genuinely interested in learning about herself, which I think is awesome. She tries her best to understand herself as well as others. Tris really becomes the best possible version of herself, she’s very selfless. She puts herself in hard situations in place of people that really don’t deserve it. She knows exactly what she needs to change to become the person she aspires to be which is something not many people can do. “Then I thought of how strong I have become, how secure I feel with the person I am now, and how all along the way he has told me that I am brave, I am respected, I am loved and worth loving.”
I had a really hard time putting this book down once I picked it up. I bought it after dinner last night, read about a third of it before I fell asleep. Then I had to work this morning, and all I talked about all day long was how badly I just wanted to read my book. Allegiant was a thrilling, suspenseful, heartbreaking end to a very well loved trilogy. There were thing’s I never expected to happen and things that made me cry like a baby. As a whole, I really enjoyed reading Allegiant and being part of this story. Although I don’t agree with all of the writing choices made, I think it was a good end to the trilogy and I look forward to whatever else Veronica Roth writes.