Summary:
Orphan Tessa Gray, sixteen, crosses the ocean from New York to find her brother Nate in Victorian London, her only possession a clockwork angel necklace from her mother. She is ignorant of her power to transform; the Dark sisters are not. They kidnap her for the Magister, who wants to marry Tessa and claim her power.
Shadowhunters, warriors of angel blood, battle demons and keep the peace in the Downworld of vampires, warlocks and other supernaturals. Orphan teen Shadowhunters Jem, Will, and Jess rescue Tessa and agree to help save Nate. Vengeful vampire Lady Camille Belcourt and her current lover, warlock Magnus Bane provide entree to the Magister’s secret Pandemonium Club. 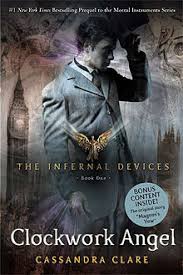 Review:
I just finished reading this book and I’m still slightly undecided on how much I liked it. I’ve loved every book that Cassandra Clare has written. I tore through the Mortal Instruments Series. It wasn’t like that for me with Clockwork Angel. I did definitely like this book even if I am undecided on how much. The characters were some that I absolutely got attached to. The story line was definitely a little unusual, but familiar to me because I’ve already read The Mortal Instruments series, well what’s already out of it. I’m excited to see where this series will go with how Clockwork Angel ended.
The characters were very similar to those in The Mortal Instruments series, some of them are actually in the other series so it was interesting reading about their past. The main character, Tessa, was a really interesting girl. At the beginning of the book she was thrown into a terrible situation and things seemed to only get worse for her. I think she handled herself very well. She was more concerned about her brother than herself. She was a very caring person and I really liked that. She tried to make the best out of whatever she had at the moment. She had this new ability and she learned to control it in terrible circumstances without much choice in the matter. Tessa experienced a lot of new things all at once. Things that would be very overwhelming and she handled everything relatively well. I liked Tessa’s character for the most part, but there were times where I just wanted to reach in the book and smack her. She could be a bit ignorant at times. But it was kind of expected with being introduced into a whole new world she knew nothing about. I admire Tessa for how strong she was through this book. I just hope she continues to be like this through the rest of the series. Then there’s Tessa’s brother Nate. I didn’t particularly like his character. He was kind of an asshole and wasn’t very appreciative of Tessa and her new friends saving his life. Then once he wasn’t dying, all he did was hit on Jessamine because she has money and he’s a douche. I really didn’t like Nate’s character, but who knows you might feel differently.
Next the Shadowhunters, Charlotte, Henry, Will, Jem, and Jessamine. Charlotte was probably one of my favorites in this book. She’s smart, determined, confident, caring, and just an all around good person. She runs the Institute with help from her husband, Henry. Although, he tends to be more trouble then help. Charlotte isn’t really taken seriously as the head of the Institute by other Shadowhunter, but I think she does a fantastic job with what she’s handed. Henry would rather stay in the basement and invent things, mostly things that don’t work. But hey, he tries and that’s what counts. I liked Henry. He was pretty funny, usually by accident, and he just cared about everyone so much. Will Herondale. It was really hard for me to not hate Will, but at the same time I had a really hard time not falling for him. He has so much going on. He wants to save the world, but won’t let anyone in to save him. And boy does he need saving. He has the mysteriousness going on and tries really hard to keep it that way. I just wanna know everything he’s hiding already! Next is Jem, he was another one of my favorites. He’s honest, funny, sweet, and just a genuinely good person. He went through a lot growing up and only wants to make the world a better place. If I could find Jem in the real world I would marry him, immediately. Last is Jessamine Lovelace. I really didn’t like her, at all. She’s stuck up, self centered, and sometimes really rude. She’s a Shadowhunter, but refuses to act like one. She sits at home and tries to find a way to make everyone’s lives difficult. I definitely think the story could have done without her, but I imagine she has a purpose. I’m just waiting to see what it is.
Overall, I liked this book. I liked most of the characters. The story line kept me interested and I’m kind of really excited to see where Cassandra Clare goes with this series. If you’ve read the Mortal Instruments Series and liked it, you should definitely give this series a try. Or if you like the paranormal, supernatural kinds of books these are right up your alley.