Hi Dears,
In this post I’m going to do the Bride Quartet series by Nora Roberts. Though the four books go together, each one follows a specific character so I’m going to go over each one.

Vision in White (Book One)
Goodreads Summary: Wedding photographer Mackensie “Mac” Elliot is most at home behind the camera, but her focus is shattered moments before an important wedding rehearsal when she bumps into the bride-to-be’s brother…an encounter that has them both seeing stars.
A stable, safe English teacher, Carter Maguire is definitely not Mac’s type. But a casual fling might be just what she needs to take her mind off bridezillas. Of course, casual flings can turn into something more when you least expect it. And Mac will have to turn to her three best friends-and business partners-to see her way to her own happy ending.

What I loved about this book was the fact that Mac doesn’t want to fall in love and Carter does. A lot of romance novels follow the sterotype that the man doesn’t want to commit and the woman does but this one is the opposite. It’s refreshing to see a male character who knows what he wants, says exactly what he’s thinking and feels, and isn’t insecure about it. Carter grew up in a loving family, has a good job, a nice house and when he meets Mac and falls in love with her, he’s not afraid of it. He doesn’t see any reason to play games or lie about it. He tells her and doesn’t expect or want her to make promises she doesn’t mean.
What I didn’t like (something I probably won’t say often because I love everything about my books in an obnoxious way) is just the fact that Mac annoys the shit out of me. Her character just thinks a lot differently than I do. Which is great except for the fact that I’m sitting here reading it like, “oh my fucking god, Mac. Don’t do that.” or “Why didn’t you fucking do that?” So it’s not really anything specific to the book that I don’t like, Mac just irritates me personally.

Bed of Roses (Book Two)
Goodreads Summary: In Bed of Roses, florist Emma Grant is finding career success with her friends at Vows wedding planning company, and her love life appears to be thriving. Though men swarm around her, she still hasn’t found Mr. Right. And the last place she’s looking is right under her nose.
But that’s just where Jack Cooke is. He’s so close to the women of Vows that he’s practically family, but the architect has begun to admit to himself that his feelings for Emma have developed into much more than friendship. When Emma returns his passion—kiss for blistering kiss—they must trust in their history…and in their hearts.

Emma and Jack’s story was my second favorite of the series. Emma, Mac, Laurel, Parker, Parker’s brother Delaney, and Delaney’s best friend have been close for years. They’ve been like a family for years. When Emma and Jack shifted their relationship from friends to romantic, Nora Roberts did a great job of showing how the group of six changed also.
I really enjoy the range of emotions and traits that Roberts gives her characters. Emma’s a born romantic and often views relationships through rose colored glasses. But when Jack stubbornly doesn’t want to become too serious, she doesn’t let him treat her that way.

Savor the Moment (Book Three)
Goodreads Summary: Laurel McBane has always relied on her friends for support, especially when her dream of attending culinary school was almost ruined by her parents’ financial problems. Now Laurel is repaying the kindness of her friends by creating extravagantly luscious tiers of cakes and other confectionary delights that add the perfect touch to their clients’ weddings. As for romance, Laurel believes in it — in theory. But she’s too low-key to appreciate all the luxuries that other women seem to long for. What she does appreciate is a strong, intelligent man, a man just like Parker’s older brother, Delaney Brown, on whom Laurel has had a mega crush since childhood. But some infatuations last longer than others, and Laurel is convinced that the Ivy League lawyer is still out of her reach. Plus, Del is too protective of Laurel to ever cross the line with her, or so she thinks. When Laurel’s quick- silver moods get the better of her — leading to an angry, hot, altogether mind-blowing kiss with Del — she’ll have to quiet the doubts in her mind to turn a moment of passion into forever…

Laurel has been in love with Parker’s brother for most of her life but never said anything because Delaney always considered her an honorary sister. (Men are fucking idiots.) When Laurel loses her temper and forces Del to rethink the way he thinks of her, their relationship changes in sometimes awkward, often hilarious, sickeningly sweet, and occasionally infuriating ways. What I like most about Laurel and Del’s relationship is the easy comraderie between them. Since they grew up together they already know everything about each other and in a lot of ways that made it easier for them to slide from frienship to romance.
Laurel and Del made me laugh constantly which is something I seriously love in a book. But both of them were so stubborn it was frustrating at times.

Happy Ever After (Book Four)
Goodreads Summary: Parker Brown turned the quartet’s childhood game of Wedding Day into their dream jobs. And now she’s the face of Vows—the one who meets every bride’s demands; keeps every event on schedule; and brings Emma’s romantic flowers, Laurel’s delicious treats, and Mac’s stunning photgraphy together in one glorious package. She knows how to make dreams come true…
Mechanic Malcom Kavanaugh loves figuring out how things work, and Parker Brown—with her mile-long legs—is no exception. But as a good friend to Parker’s brother, Mal knows that moving from minor flirtation to major hookup is a serious step.
No man has rattled Parker in a long time, but the motorcycle-riding, raven-haired Mal seems to have a knack for it. His passionate kisses always catch her of guard, much like her growing feelings for him. Parker’s business risks have always paid off, but now she’ll have to take the chance of a lifetime with her heart. 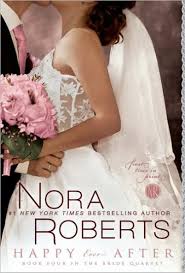 This was my favorite book in the series. I want Malcom to magically jump out of the book and I will love him forever. I think my favorite thing about the book is how similar Parker is to me. Malcom confuses, rattles, and catches her off her guard, which are things that hardly ever happen to her. We see Parker a lot throughout the other books and finally seeing her out of her element was entertainging to say the least. Parker and Malcom are a lot different and it was cool to see them interact and mesh their personalities so they balanced each other instead of constantly butting heads.

Even though the four books each follow one specific couple, we see all of them throughout the books and it’s hard not to get attached to them. It was great to be able to watch all of them and see every aspect of each characters lives. This was the second or third time I’ve read this series. It’s one of my favorites. I personally think they’re four books that you can read over and over again and love every time. I highly recomend them.
-Antonia